Joseph A. Fluehr III was born and raised as the oldest of eight children, in Philadelphia. He graduated from the College of West Virginia and continued on to the Pittsburgh Institute of Mortuary Science, where he received his Degree in Applied Sciences. He is the proud owner of the Richboro funeral home, (est. 1975) and the New Britain Funeral Home (est. 1997) as well as Laurel Cremation Services Inc., located on the grounds of the Richboro funeral home. As an active member of the community, he has been involved with many different organizations - from the Northampton Township Volunteer Fire Department, Tri-Hampton Rescue Squad Advisor Board, St. Mary Medical Center, past Chairman of the Board of Trustees, (1988-1997), St. Mary Medical Center Entities Board (since 1997), Prime Bank Corporate Secretary (1985-1998), Council Rock Kiwanis, Pennsylvania State Board of Funeral Directors (1997-2014), Chairman from 2010-2012, Member of the Cremation Association of North America, National Funeral Directors Association, Funeral Ethics Association, Northampton Township Business and Professional Association (Business Man of the Year, 2015), and the Northampton Township Historical Society. Joe is a parishioner of St. Bede the Venerable Church, Holland. He is a 4th Degree Knight with the Knights of Columbus in the RV Hennessy Council. He lives in Richboro with his wife of 47 years, Christine, and they have three children, and 6 dear grandchildren. In his free time, Joe enjoys playing golf and traveling.

Christine Fluehr was grew up in the Torresdale section of Philadelphia.  While she attended school in the city, her family spent summers in Bucks County on the family farm.  Chris earned her BA in economics from Immaculata University in 1966 and married Joe Fluehr three years later.  In 1976, she and Joe opened their first funeral home.  Chris is a tireless community activist.  She’s a member of the Soroptimist International of Indian Rock where she served as president of the board.   While a member of the Northampton Township Historical Society, she served as board president and was honored to receive the Living Tree Award in 1993.  Other involvements include the Northampton Business and Professional Association, St. Bede’s Women’s Club, Community League of St. Mary Medical Center, where she served as a board member, and 100 Women Who Care.  Chris was also a member of the St. Mary Medical Center Foundation Board, and the Bucks County Community College Foundation Board. She’s an active member in her church, St. Bede the Venerable in Holland.  Chris and Joe have three children, Tina (Jeff), Joe (Kathy,) and Trish (Joe.) She is also the proud grandmother of JV, Maggie, Conor, Kiley, Joe Jr., and James.  In addition to spending time with her family, Chris enjoys golf, traveling, spending time with friends, and laughing.

Joseph A. Fluehr IV graduated from Loyola College with a BA in Business Administration and then continued on to Pittsburgh Institute of Mortuary Science, Pittsburgh, where he received his Degree in Applied Sciences in 1995. That same year, he began fulltime employment in the family business in Richboro, which has evolved to meet the needs of the families they serve. (The funeral home expanded and built a second location in New Britain and an on-site crematory in Richboro.) Joe is active in both communities. He is involved with organizations such as the Northampton Township Business and Professional Association, Central Bucks Chamber of Commerce, and was a former member of the New Britain Borough Zoning board. Professionally, he is a proud member of Pennsylvania Funeral Directors Association, Cremation Association of North America and is a Certified Crematory Operator, National Funeral Directors Association, and the Funeral Ethics Association. He is an active parishioner of St. Jude Church, Chalfont. For almost 20 years, he has hosted an annual community egg hunt on the grounds of the New Britain Funeral Home. Joe resides in Doylestown, with his wife Kathy and children, Joe and Maggie. When he’s not serving and caring for the community, he enjoys hunting, fishing, camping, but most of all spending quality time with his family. Joe believes strongly that his work is more like a vocation and that “I am blessed to serve those in need, to create an individual, personalized, and meaningful service for someone they loved.”

Before moving to Bucks County, Bill was a life-long resident of Northeast Philadelphia where he graduated from Archbishop Ryan High School and LaSalle University. Bill completed his mortuary studies at American Academy McAllister Institute in New York and has been a licensed funeral director since 1986. Bill joined Joseph A. Fluehr III Funeral Home in 1990 and is a proud member of the Buxmont Funeral Directors Association. In his spare time, he enjoys all types of travel be it domestic or international. 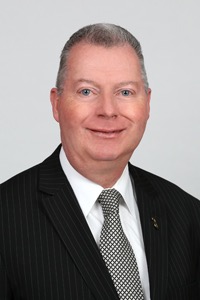 Francis J. Plover began working with the Fluehrs in 1998. Frank graduated from Northeast Catholic High School for Boys in Philadelphia. For several years, he worked in the banking industry while taking evening courses in Business Administration at LaSalle College. At the age of 28, he made the decision to become a funeral director and attended mortuary school. He was part of the second graduating class of Funeral Service at Northampton County Community College in Bethlehem, PA, where he received his Associates Degree in Applied Science. He has been married since 1975 to his wife, Rose. They have three grown children and are parishioners of St. Cyril of Jerusalem Church in Jamison. In his free time, Frank enjoys being “Pop Pop” to his grandchildren, going to movies, relaxing and dining out with friends, eating chocolate and discussing his Irish heritage.

Salvatore “Sal” LaVecchia II was born and raised in Oakford, PA and attended Assumption B.V.M parish. He attended Bensalem High School and matriculated through the Mortuary Sciences Program at Mercer County Community College. Sal joined the Joseph A. Fluehr III Funeral Home during his year-long internship after mortuary school in 2004. Upon completion of his internship, Sal was invited to remain on staff as a full-time Funeral Director. He is an active member of St. Ephrem Catholic Church and is a 4th Degree Member of the Knights of Columbus in the St. Katharine Drexel Council. Sal resides in Trevose, PA with his wife Elizabeth “Betty” and their children Ashley, Sophia, and Salvatore J. LaVecchia III.

Born and raised in Glenside, Tim graduated from Bishop McDevitt High School and went on to earn his Bachelor of Arts degree in Communications from York College of Pennsylvania. After making the decision to enter funeral service, he attended Northampton Community College where he earned his Associates in Applied Science degree in Funeral Service Education. Tim has been a licensed Pennsylvania Funeral Director since 2009. He joined the Fluehr team in February of 2014. Tim volunteers with Manna on Main Street in Lansdale as a member of the annual 5K planning committee. He served on the board for United Cerebral Palsy of Philadelphia from 2011-2012 where he also served as chairperson for the Young Leadership Committee. Tim and his partner, Michael, reside in New Hope. 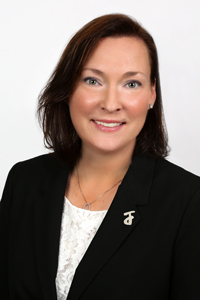 Raised in Newtown, Amanda graduated from Council Rock High School where she decided to become a funeral director. She received her Bachelor of Arts degree in Social Welfare and Sociology from Bloomsburg University in 1997 and then earned her Associate in Applied Science degree from the Pittsburgh Institute of Mortuary Science. Prior to joining the Joseph A. Fluehr III Funeral Home, she worked as a funeral director for many years in New Jersey. The most important part of her job comes from making a difference in a family’s life and helping them to create a meaningful tribute to their loved ones life after a death. Amanda currently lives in Mercer County, NJ with her family and two dogs. Whether it’s a day at the beach, hiking in any of the Pennsylvania parks, or a day at one of Philadelphia’s museums, she always looks forward to time spent with her daughter, Hannah. She also enjoys reading, early morning exercise classes, and dinner with friends.

Michelle C. Reilly was raised in Allentown, PA and moved to Montgomery County in 2013. She is a 2009 graduate of Kutztown University with Bachelor’s of Science in Psychology and Minor in Fine Arts. Prior to her career in funeral service, Michelle was employed as a Case Manager assisting adults with disabilities. Looking for a career change, Michelle attended Northampton Community College’s Funeral Service Education Program and has never regretted her decision! She is the wife of Sean Moore and a loving dog mom to their Beagle-Chihuahua mix, Mona. In her spare time, Michelle enjoys traveling, shopping, snowboarding with Sean, and hikes with Mona.

Nancy Hilem was raised in Langhorne, PA and went to Villa Joseph Marie High School. She later attended Gwynedd Mercy College and graduated with a Bachelors Degree in Business Administration. For over 30 years, Nancy has been in the funeral profession, providing on-going support and compassion to countless families. She joined Fluehrs in 2006 and is often the first person that families will encounter when their loved one dies. Nancy is married to Ed and resides in Yardley, PA. She is the mother of two children, Jacob and his wife Anna, and Amanda and her husband Ralph. She is also the proud grandmother of Jaden, Avery, Haley and Logan. Nancy enjoys the beach, reading, knitting, bike riding and spending time with family.

A life-long Bucks County resident, Cathy was raised in Holland PA and graduated from Archbishop Wood High School. She continued on to LaSalle University where she received her Bachelor’s Degree in Business Administration. Cathy has proudly worked for the Fluehrs since 1992. Cathy resides in Warminster, PA with her husband, Chris, whom she married in 1990. Cathy and Chris have seven children - Christopher, Thomas, David, James, Joshua, Caitlyn and Amanda. Cathy and her husband run a non-profit called D.A.V.E. (Drug Awareness oVerdose Education) which educates the community about drug addiction and provides Narcan kits to families of loved ones suffering from addiction. In her free time, she enjoys spending time with her family and cheering on the Archbishop Wood football teams.

Donna Cushing joined the Fluehr Funeral Home in 2011, with an MBA from St. Joseph’s University and 25 years of work experience in both the corporate and private sectors. She resides in Bucks County with her husband Michael, their three children, Anna, Cara & Colin, and Donna’s sister Anita. They love hosting family gatherings throughout the year, especially Thanksgiving dinner! Donna also enjoys walking, wine-making, calligraphy, and attending and volunteering at St. Jude’s Church.

Bob is a life-long resident of Glenside, PA where he attended Abington High School and continues to be an active member of his community. He joined the Fluehr Funeral Home team in 2015 after he graduated from Northampton Community College with his Associates Degree in Applied Science. Bob enjoys a variety of activities, but he especially loves working with special needs children as a soccer, basketball, and floor hockey coach. And every year, he spends a week of his vacation as a volunteer with the Special Olympics.